It’s been twenty-five years since the disastrous Oslo Accords were forced on an Israeli public with grave consequences to the Jewish State that are still being felt today. 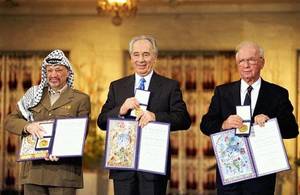 Back then the world touted the accord as a solution to the ‘Palestinian debacle’.  Yitzhak Rabin, Shimon Peres and the then PLO leader Yaser Arafat went on to be awarded the Nobel Peace Prize for concocting a nonsense that world leaders and opinion makers would eventually turn into the ‘Two-State’ solution.

Nothing could have been further from the truth while Arafat saw an opportunity to further his plans for the destruction of the Jewish State by promoting the Oslo Accords as something that neither parties had intended.

Yitzhak Rabin made it clear that he saw the accords initially as a means to creating an “entity short of a state that will  independently run the lives of the Palestinians under its control“.

While Shimon Peres made overtures to the United States and Egypt for a Jordanian-Palestinian state which was rejected by both countries as unacceptable.

Arafat, on the other hand, used his usual subterfuge to muddy the waters by falling back on United Nations Security Council Resolution 224 which stated there should be talks between Israel and its Arab neighbours to resolve their territorial disputes and make peace.  While at the same time telling his Arab audience that there would be a Palestinian State from “the river to the sea.”

The facts are Oslo did not allow for a Palestinian State but has been conveniently used by anyone with an agenda for undermining the State of Israel. 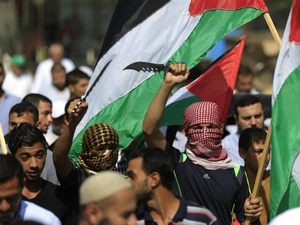 Even Jewish leaders bought the canard ‘Hook Line and Sinker’ and went down the path of the Two State solution to their shame.

And that’s the fate of the ‘Oslo Accords’ they are dead and buried.

May you R.I.P Oslo Accords for no one will mourn your passing.

Yosef Yigal Drever and Sylvia Drever co-founded Achdut HaLev in 2006 to reach out to the Jewish community's around the world providing support in learning Torah and promoting the 'Return of the Jewish people to the Land of Israel.' Yosef Yigal made Aliya in 2014 while Sylvia his wife is an Israeli. In late 2014 Achdut HaLev concentrated all its resources towards Aliya and the rebuilding of Eretz Yisrael. Excluding none and embracing all. The commandment to settle the Land of Israel is equal in importance to all the Torah Commandments all together: (Sifri Deut 12:29)

Please log in again. The login page will open in a new tab. After logging in you can close it and return to this page.